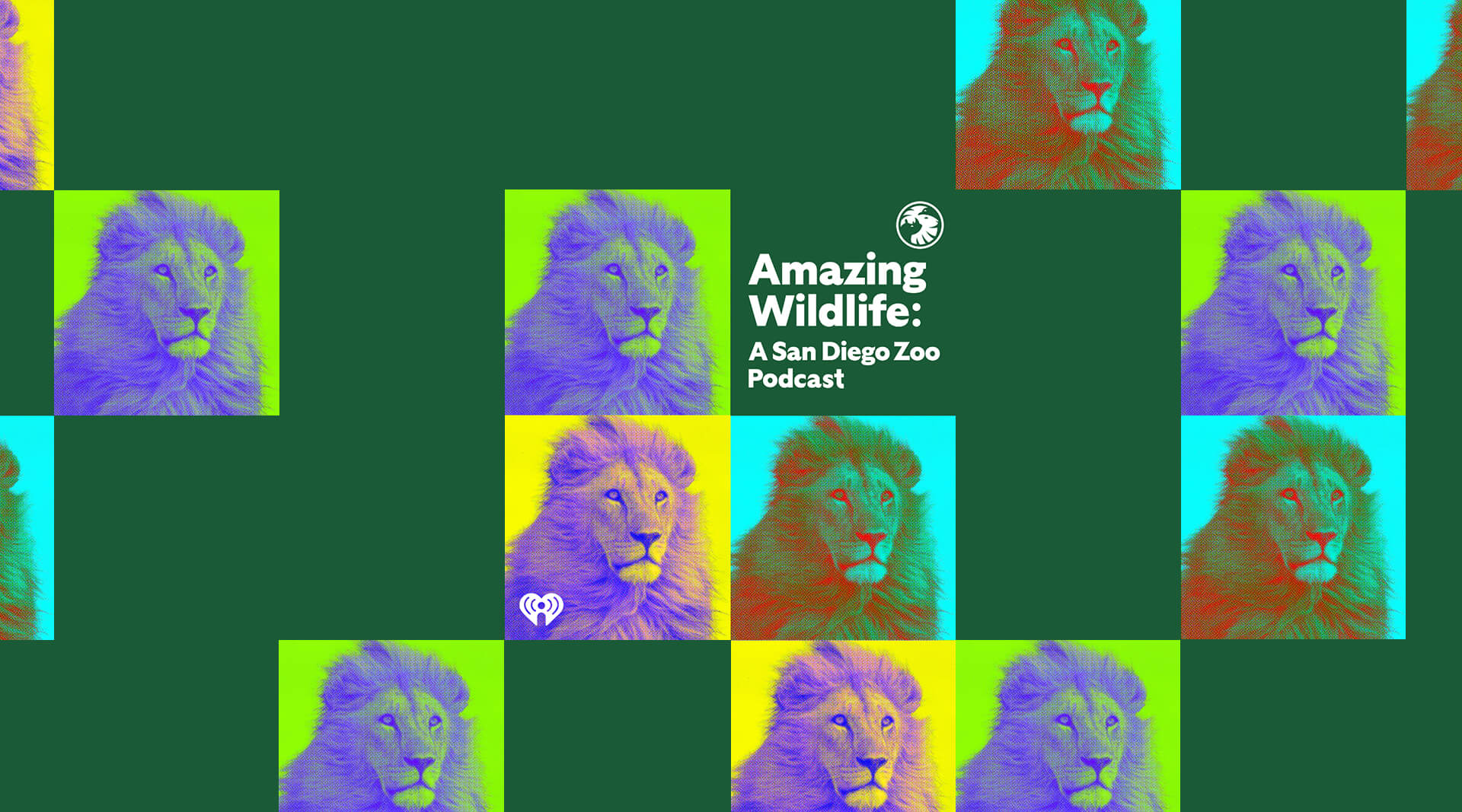 Amazing Wildlife provides you with a behind-the-scenes look inside the San Diego Zoo and San Diego Zoo Safari Park, so you gain insights on rare species and explore the ongoing conservation efforts to save endangered wildlife, no matter how big or small. Join us as your hosts Rick Schwartz and Ebone Monet also transport you around the globe to highlight San Diego Zoo Wildlife Alliance’s collaborative efforts with local communities to drive positive change for the future of animals and plants. Through one-of-a-kind stories, you’ll hear what it takes to create a healthy next chapter for not only wildlife, but also for the people who share their habitats.

It's Easy to Listen

To listen to Amazing Wildlife, download the iHeartRadio App or go to Apple Podcasts or wherever you listen to your favorite shows.

And you can participate in the podcast! If you have a question for Amazing Wildlife, you can record it and send your audio file to wildlife@iheartmedia.com for your chance to hear it on the show. 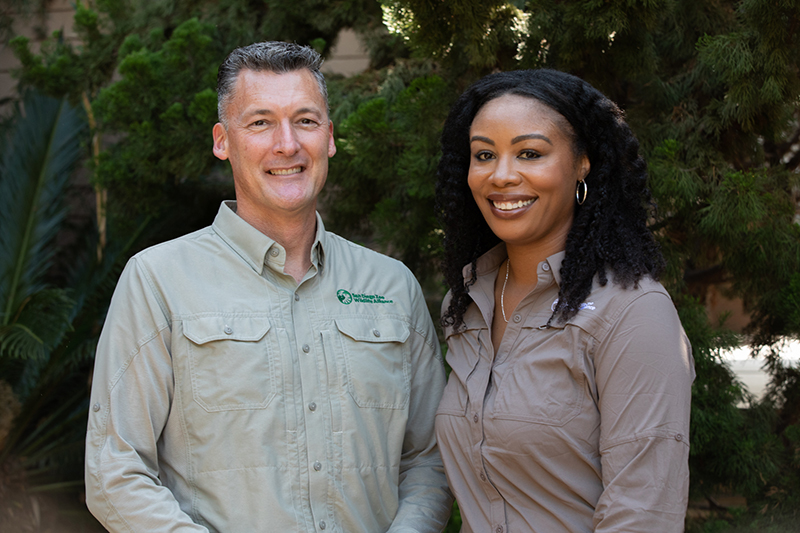 Join Rick and Ebone every week as they take you around the world to discover spectacular species. Each Friday in 2022, a new episode will debut!

Discover a Diversity of Wildlife

Episode 1 - Currently Live
Elephants: Who's Leading the Herd?
Description: For the very first episode, Amazing Wildlife explores the gender roles of African savanna elephants and their responsibilities in the herd, and demystifies the structure of the elephant trunk. Host Rick Schwartz explains how we can distinguish between an African forest elephant, an African savanna elephant, and an Asian elephant. Host Ebone Monet sits down with San Diego Zoo Wildlife Alliance President and CEO Paul Baribault to find out how the organization partners with the Reteti Elephant Sanctuary to save and protect orphaned elephants in Kenya.

Episode 2 - Currently Live
Polar Bears: Rulers of the Arctic
BBBBRRRRRR it's cold in here! In this episode, Amazing Wildlife analyzes the behaviors of the polar bear and explains the tools these creatures use to survive in the extreme weather conditions of the Arctic. Hosts Ebone and Rick discuss the parents' roles in raising cubs, how polar bears hunt for food, and the challenges of studying such a big animal. The hosts answer a question from a young listener about why polar bears are (or aren’t) white.

Episode 3 - Currently Live
Koalas: Braving the Australian Bushfires
Some may think that koalas are “bears,” but that is not true! In this episode, Amazing Wildlife explains what species koalas ​are, and why they move slowly and often look sleepy. Host Rick Schwartz tells us how koalas break down and digest eucalyptus, a plant that is toxic to most animals. Host Ebone Monet chats with Dr. Kelli Leigh from Science for Wildlife in Australia to find out how koalas were saved during the Australian bushfires in the summer of 2020. You’ll learn how the San Diego Zoo takes care of koalas, and what you can do to help save our animal friends.

Episode 4 - Currently Live
Tigers: Exploring the Six Subspecies
They are powerful, elusive, and disappearing. We’re talking about the mighty tiger! Hosts Rick and Ebone explore the many mythologies surrounding the tiger in different cultures, clear up common misconceptions about the white tiger, and explain the differences between the six subspecies. San Diego Zoo Wildlife Alliance President and CEO Paul Baribault joins the show to discuss how the organization partners with SINTAS Indonesia for a first-of-its-kind long-term research and conservation project to reduce the number of human-tiger conflicts.

Episode 5 - Currently Live
Pacific Pocket Mouse: Little Creatures, Big Impact
In this episode, Amazing Wildlife looks at one of the smallest mammals in North America, the Pacific pocket mouse. Rick tells us how this animal got its name, their importance for our environment, and the threats they face in their native habitats. Ebone is joined by Dr. Debra Shier, who leads San Diego Zoo Wildlife Alliance’s Pacific pocket mouse conservation program. Dr. Shier details the process of researching the animal that has made a comeback after it was thought to be extinct!

Episode 6 - Currently Live
Komodo Dragon: The Deadly Bite
Discover the real-life dragons of Komodo Island on this episode of Amazing Wildlife! Hosts Rick and Ebone uncover how this fascinating reptile got its name, the evolution of the species, and what makes their bite so deadly. The hosts respond to a young listener's question about the Komodo dragon's diet.

Episode 7 - Currently Live
Gorillas: Gentle Giants
They are among our closest relatives in the Animal Kingdom. We’re exploring unique facts about these charismatic, intelligent forest dwellers…gorillas! Hosts Rick and Ebone examine the similarities between gorillas and humans, and reveal how gorillas are endangered—even though they have no natural predators. Biologist Dr. Bethan Morgan joins the show from Cameroon’s Ebo Forest, where a distinct sound led a San Diego Zoo Wildlife Alliance scientist to discover a group of gorillas previously unknown to science.

Episode 8 - Currently Live
‘Alalā: The Disappearance of the Hawaiian Crow
They’re endemic to the Hawaiian Islands and found nowhere else in the world. We’re exploring how the introduction of cats, dogs, rats, and mongooses contributed to the population decline of a bird revered in Hawaiian culture—the ‘Alalā! President and CEO Paul Baribault joins the show as we learn about how San Diego Zoo Wildlife Alliance and its partners are working to protect and breed this endangered bird so populations can fly through their home forests once again.

Coming Soon! Every Friday, a New Episode Is Released

Episode 9
Giraffes: Hello Up There!
Today, we’re discussing the tallest land animals: giraffes! Hosts Rick and Ebone reveal interesting characteristics of the species, which can kill a lion with its kick—and we explore their unique features, such as hair-covered horns called ossicones. San Diego Zoo Wildlife Alliance scientist Dr. Kirstie Ruppert joins the show to talk about her work with the Twiga Walinzi group to protect giraffes in Northern Kenya from being hunted and illegally trafficked.

Episode 10
Penguins: Tuxedo-clad Seabirds
They are black and white and loved all over. We’re talking about penguins! Hosts Ebone and Rick highlight the social dynamic of these flightless seabirds, and reveal how the San Diego Zoo is able to reflect the native habitat of African penguins, who live in a warm climate. Dr. David Roberts joins us from the Southern African Foundation for the Conservation of Coastal Birds, also known as SANCCOB, who are first responders for coastal birds. Dr. Roberts explains what is necessary to save underweight and abandoned African penguin chicks, to help support the population of this endangered species.

Episode 11
Leopards: Solitary, Cryptic, and Out of Sight
Who knew that leopards are attracted to perfume? Hosts Ebone and Rick talk to a San Diego Wildlife Alliance scientist, Dr. Nicholas Pilfold, about how a specific scent helped him photograph an elusive black leopard. Little is known about the population size or conservation status of African leopards, but Dr. Pilford gives details about the Uhifadhi wa Chui project that is trying to help change that. Uhifadhi wa Chui means “leopard conservation” in Kiswahili.

Episode 12
Black Rhinos: Touting Their Horns
This episode is dedicated to conservation efforts to save the black rhino, which is unfortunately critically endangered due mostly to international trade in rhino horn. Hosts Ebone and Rick address this problem, as well as how the size and strength of rhinos affects the way specialists at the San Diego Zoo and Safari Park care for them. San Diego Zoo Wildlife Alliance President and CEO Paul Baribault is back to discuss working with the organization’s partners to help protect native populations of black rhinos and achieve population sustainability.