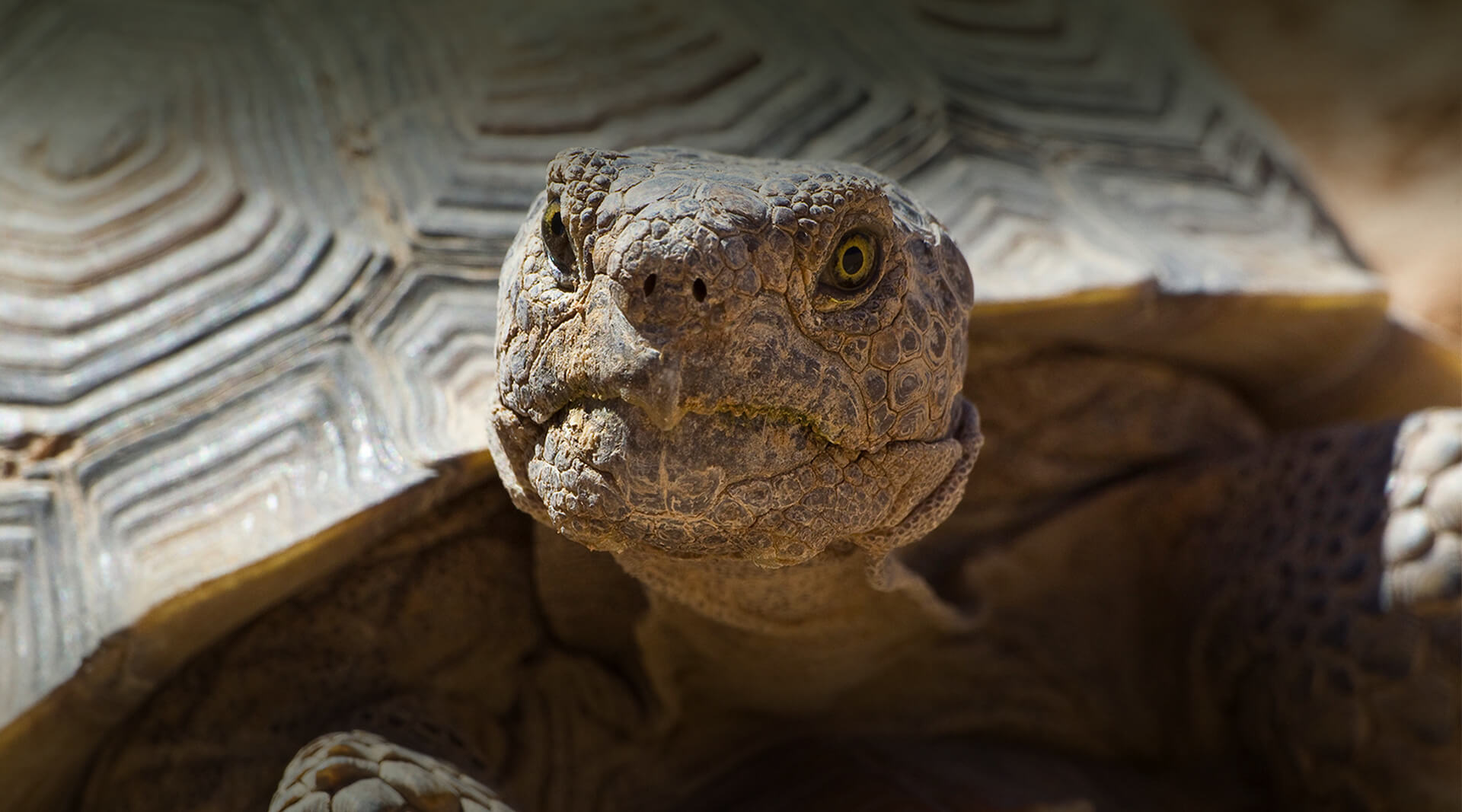 Desert Tortoises: Stars of the Southwest

With thick, domed shells that grow with a brilliant star pattern, it’s easy to think nothing could threaten the Mojave desert tortoise. Desert tortoises are a long-lived species that inhabits the Mojave Desert. They take years to reach adult size and maturity. In fact, much about them is slower-paced than in many mammalian species—although they are quicker on their feet than one might think. Adapted to living in a desert environment, they are one of many species facing progressive habitat loss and fragmentation. Deserts of the Southwestern US are being transformed, with solar energy, housing, and infrastructure projects—all for the needs of our growing population.

They were listed as federally threatened in 1989, and it is estimated that desert tortoise populations in the wild have declined more than 80 percent in the last 30 years. At this rate of decline, the desert tortoise could be functionally extinct in the wild in less than two decades.

As people impact native habitats, we often need to find ways to successfully move species out of harm’s way. Although scientists understand generally what kind of habitat desert tortoises need, a grant from the California Energy Commission is helping us learn about specific resources in the environment that may make the tortoises less vulnerable to predators, provide much needed nourishment, as well as protection from extreme temperatures.

In another innovative partnership, we’re working with the U.S. Geological Survey, Edwards Air Force Base, and the Bureau of Land Management to gain a better understanding of the factors affecting juvenile tortoise survival in different regions of the desert, and how best to help this species thrive.

San Diego Wildlife Alliance’s conservation program with the desert tortoise began in 2009, when, at the request of our partners, we took responsibility for managing the Desert Tortoise Conservation Center near Las Vegas, Nevada. The center contributed to recovery of the tortoise through collaborative research, conservation, training, and education. Together we rescued, cared for, and released more than 2,700 tortoises at 6 sites. These animals served a crucial role in supplementing wild desert tortoise populations. Our team’s associated research identified the key factors needed for successful reintroduction of tortoises. Researchers also examined predator evasion strategies, foraging behavior, individual characteristics, and the importance of critical resources, such as burrows, for tortoise survival.

At the San Diego Zoo, our wildlife care specialists and conservationists have reared 150 young desert tortoises for 1 to 2 years—giving them a fighting chance by providing a safe environment during their most vulnerable period—before releasing them. By attaching radio transmitters to each individual, we’re tracking their movements, reproductive success, survival, and body condition over time—critical knowledge that will help guide our conservation efforts, and inspire our partners and guests to join our efforts.

In addition to research and care of desert tortoises in our backyard in the Southwest United States, San Diego Zoo Wildlife Alliance partners with organizations around the world to conserve the species, help with rescue efforts in response to disasters, and combat rampant wildlife trafficking.

In 2018, nearly 11,000 critically endangered radiated tortoises were discovered by local police in a private residence in Madagascar. The tortoises had no access to food or water, and hundreds had died from dehydration and illness. Experts from San Diego Zoo Wildlife Alliance were dispatched with supplies to administer medical and general animal care.

Working with local authorities and the conservation law enforcement authorities in Madagascar, we suspect the tortoises were collected for the illegal pet trade, possibly for shipment to Asia, where the tortoises’ highly domed shell featuring a star pattern makes them highly prized.

“Unfortunately, we have had a number of situations in recent years where our staff has been called upon to assist animals that have been caught up in wildlife trafficking,” said Kim Gray, curator of herpetology and ichthyology, San Diego Zoo Wildlife Alliance. “This is an overwhelming situation, where we recognize that every individual we save may make the difference between this species’ long-term survival and its extinction. We have to help.”

California Department of Fish and Wildlife