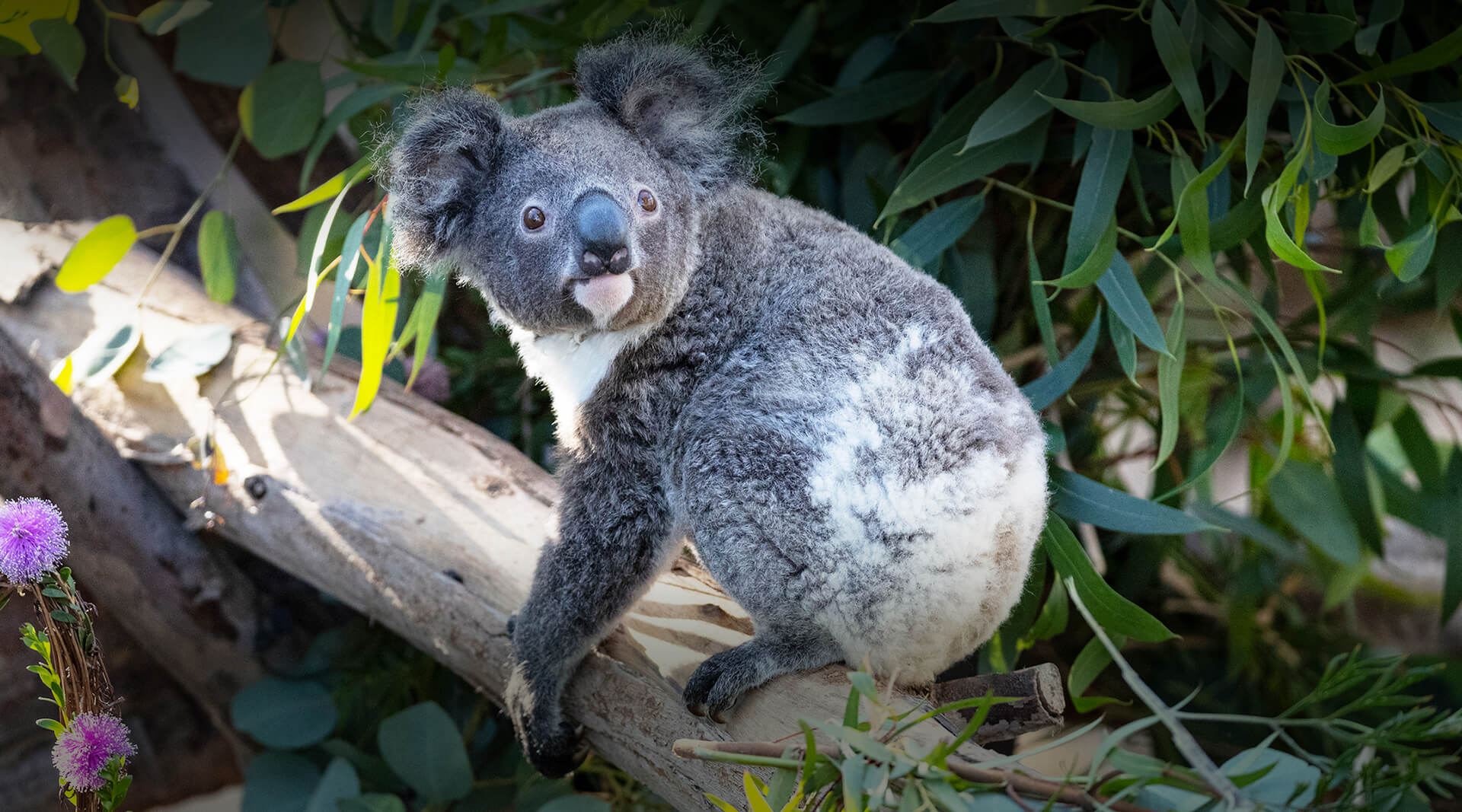 Koalas: Icons of the Outback

The Australian forests are home to some of the most iconic and unique wildlife on earth. Cuddly looking and docile, koalas are perhaps the most recognizable species on the continent—but also one of the most vulnerable.

Hunted for their fur, koala populations dropped dramatically between 1888 and 1927, leaving fewer than 300,000 in existence. Today, koalas face new threats: they’re hit by cars, attacked by dogs, and suffer from diseases that have spread through most of the remaining population on earth. Adding to the crisis, climate change is amplifying the frequency and intensity of bushfires, forcing the koala from its forest home. While these brutal wildfires take a toll on koalas, scientists are learning as much as they can to help nurse them back to health.

San Diego Zoo Wildlife Alliance’s history collaborating and partnering with Australia’s government dates back to 1925, when the Zoo became an important backup population for koalas. Wildlife care professionals and scientists study koala populations, both at the Zoo and Safari Park and in their Australian habitats, to better understand the species’ complex ecology, mating behaviors, and health. Our efforts and research were thrust into the spotlight in 2020 when Australia faced devasting wildfires that damaged millions of acres of land, including more than 80 percent of the Greater Blue Mountain World Heritage site. San Diego Zoo Wildlife Alliance stepped forward to engage and rally millions of supporters across the US to help fund relief efforts in Australia, and support its partners in the region—committed to rescuing the remaining wildlife and building conservation strategies for the future.

From Crisis to Progress

San Diego Zoo Wildlife Alliance has been a core partner with Science for Wildlife and the Greater Blue Mountains World Heritage Koala Project since it began in 2014. Australia’s Greater Blue Mountains World Heritage Region is home to the most genetically diverse population of koalas in the world. When megafires raced through the region in early 2020, researchers from Science for Wildlife, with the support of San Diego Zoo Wildlife Alliance, installed water sources like drinkers and large tanks, and carried them into key areas where wildlife was likely able to find shelter in surviving trees and bushes. These organizations were also able to rescue koalas from approaching bushfires and eventually reintroduce them back into their home in the eucalyptus forests.

The koalas were then equipped with radio-tracking devices that allowed researchers to follow them and find out more about how koalas use the landscape after a wildfire. This valuable information will help researchers better support koalas under threat of climate change, as more frequent and intense fires are expected in the future.

“To be the most effective wildlife conservation organization for the world, we seek participatory and collaborative partnerships that amplify our impact,” says Dr. Nadine Lamberski, chief conservation and wildlife health officer for San Diego Zoo Wildlife Alliance. “These historic wildfires will completely change how wildlife is supported in Australia in the future, and San Diego Zoo Wildlife Alliance will be there to support our partners as they fight to protect native species.”

Unfortunately, it wasn’t just the forests that were affected by the fires. The waterways and the creatures that live within them were severely impacted, too. Huge amounts of ash from the fires built up in rivers and streams, and created a thick mud that polluted the water. And since the iconic platypus is significantly affected by the health of the waterways, it was important to determine the impact the fires had on their home.

“By working collaboratively with our committed partners, we contribute to larger, global initiatives that aim to restore biodiversity, to help us create a healthier, thriving planet,” says Paul Baribault, President and CEO of San Diego Zoo Wildlife Alliance. “A planet where all life thrives.”

Association of Zoos and Aquariums (AZA)

Watch Koalas at the San Diego Zoo on our Koala Cam