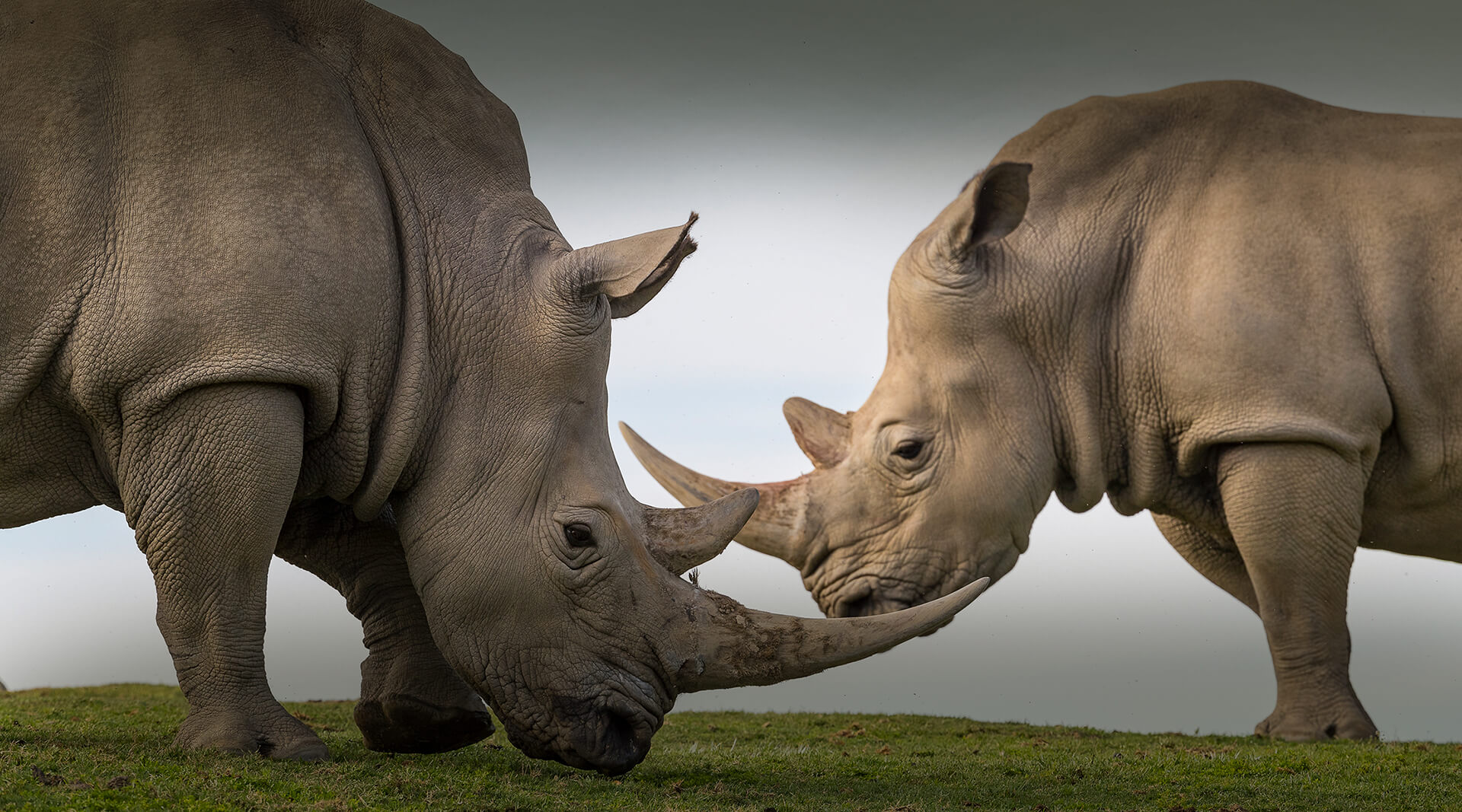 Savanna
Join Us in Helping Rhinos
Become an Ally
DONATE

White Rhinoceroses: A Race Against Time

Standing 6 feet tall, weighing up to 5,000 pounds, and thundering along at speeds up to 40 mph, it's no wonder a group of white rhinos is known as a “crash.” And yet these gentle giants of the savanna are content munching away on grasses, wallowing in a refreshing mud hole, and raising their young. Big and mighty as they seem, rhinos are poached for their iconic horns, threatening their ability to survive in the wild. Poaching mother rhinos is doubly devastating because their orphaned babies often die, too. Calves depend on their mothers for up to 4 years.

While all rhino species are threatened, the northern white rhino has suffered worst of all. Decades of rampant poaching have left just two on Earth. Both are females, so they are unable to breed. At the San Diego Zoo Wildlife Alliance, we're working with partners around the globe to save them before they disappear forever. By combining groundbreaking science, brand new technology, and decades of world-class wildlife care expertise, we're developing innovative techniques for assisted reproduction. And it’s working. Hope is on the horizon.

With his fuzzy ears, wrinkly knees and enormous feet, Edward the rhino had the adoration of millions before he was a week old in 2019. But Edward has another claim to fame: he is the first southern white rhino in North America born as a result of artificial insemination, a groundbreaking approach to conservation supported by San Diego Zoo Wildlife Alliance and our partners in Africa and around the world. His birth is especially important because of the role it plays in the effort to save the northern white rhino from extinction.

“I’ve been so fortunate to have a front row seat to Victoria’s pregnancy and Edward’s birth and development,” says Jonnie Capiro, Wildlife Care Specialist at San Diego Zoo Wildlife Alliance. “I get to work with the rhinos and scientists every day. Witnessing groundbreaking science unfold in the name of rhino conservation is incredible.”

The San Diego Zoo Wildlife Alliance has developed and supported an innovative approach to conserving this threatened species: Genetic rescue. Our conservation researchers have collected and analyzed whole genome sequences of northern and southern white rhinos and determined that a sufficient gene pool exists to recover a population. This incredibly valuable and fragile genetic material is safely guarded and studied in San Diego Zoo Wildlife Alliance's Wildlife Biodiversity Bank, where conservationists obtain living cell lines to be used in developing assisted reproductive technologies, including artificial insemination and in vitro fertilization. We have developed northern white rhino stem cells, which will eventually become sperm and eggs that will generate embryos. The female southern white rhinos at the Safari Park’s Nikita Kahn Rhino Rescue Center could potentially serve as surrogates for northern white rhinos.

With more than 100 calves born at the San Diego Zoo Safari Park, we are one of the world’s leaders in white rhino breeding already, aided by scientific research on nutrition and the reproductive health of our herd. Looking ahead, implementing and advancing the innovative new genetic rescue strategies is the future of conservation for this species in the wild.

“Our ultimate goal is to not create a single northern white rhino,” says Paul Baribault, President and CEO of the San Diego Zoo Wildlife Alliance, “but to reintroduce an entire herd into their historic range.”

Look for southern white rhinos on the savanna at the Safari Park, live on Giraffe Cam