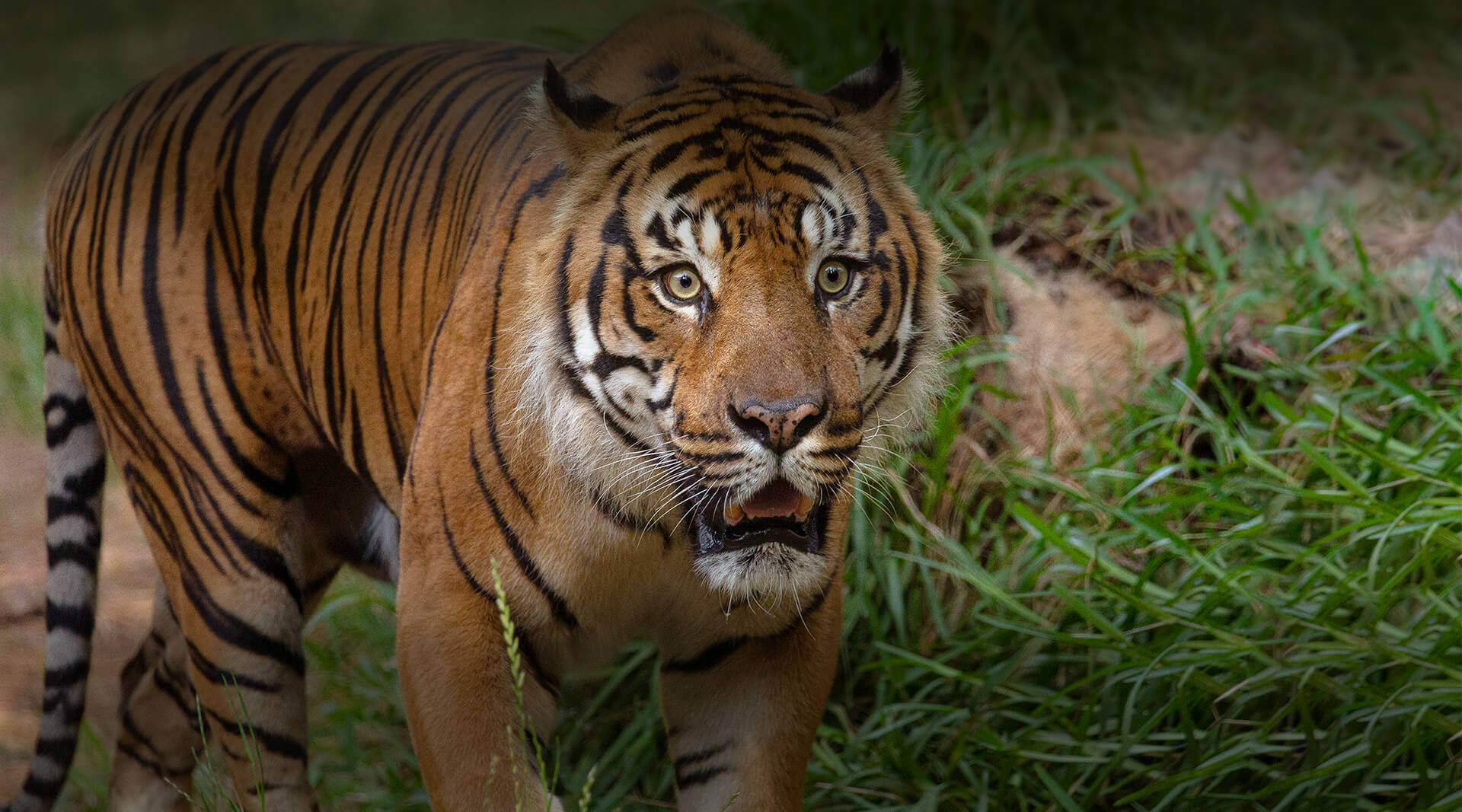 Tigers: Eyes of the Forest

With gorgeous striped coats and a mesmerizing gaze, tigers are among the world’s most revered wildlife. It’s a reverence that’s mixed with a bit of fear; the world’s largest species of cat is well-muscled and stealthy, stalking prey with a quiet confidence that demands respect.

Though powerful, tigers are facing a fragile future. Suitable habitat for the species is fast disappearing. In Sumatra, forests are converted into palm oil plantations at an alarming pace due to meet global demand. “Flying over Sumatra is like flying over an ocean of oil palm plantations,” says Mathias Tobler, Ph.D., associate director in population sustainability at the San Diego Zoo Wildlife Alliance. “There’s no question that it’s the core driver of deforestation."

As tiger ranges shrink, and large prey becomes scarcer, tigers and people are increasingly put into conflict. Desperate tigers prey on domestic livestock, or attack humans when feeling threatened. San Diego Zoo Wildlife Alliance scientists study tigers in West Sumatra at a site which has one of the highest incidences of human-tiger conflict on the island.

Poaching is also a major challenge for the survival of tigers. Some people still attribute medicinal value to various tiger body parts, even though any such benefit has been disproven. A 1993 ban on the trade of tiger parts in China has reduced the level of poaching in recent years, but illegal wildlife trafficking—a $19 billion global industry frequently responsible for disease outbreaks— continues as long as demand remains. The lucrative practice is closer to home than you might think: with an international border on one side and an international port on the other, San Diego is a prime entry point for the illegal trafficking of endangered species.

Saving tigers can only be accomplished by working together across borders and in partnership with foreign governments if we are to save this magnificent species before its too late. San Diego Zoo Wildlife Alliance collaborates with partners in Indonesia on a long-term conservation program to study the ecology of the Sumatran tiger. Tigers are elusive, but their paw prints (called pugmarks) and scat (feces) are clues that tell us which areas tigers occupy; trail cameras provide even more detailed information. To better understand how Sumatran tigers travel and use their habitat, our conservation team is fitting some of them with GPS collars with integrated cameras and activity sensors. We work closely with Indonesian government agencies to provide technical support and provide training for young Indonesian conservationists and government officials.

At the San Diego Zoo and San Diego Zoo Safari Park, we share years of experience in animal care and scientific knowledge vital to the conservation of tigers. We are learning about variables that influence individual tigers’ breeding success by correlating a tiger’s reproductive behavior and success with their reproductive and stress hormone levels. We use the same techniques to monitor a tiger’s transition to new a habitat. This research forms an essential part of our commitment to maximizing the health of the tigers in our care, as well as augmenting our field research efforts in Sumatra.

“The erosion of large wilderness areas pushes Sumatran tigers one step closer to extinction,” says Tobler. In Sumatra, past conservation work has focused mostly on protected areas; however, tigers rely on unprotected forests for their survival and connectivity as well. The goals of our work in Sumatra are to protect tigers by reducing human-tiger conflict situations, and formulating best practices in tiger management in these landscapes. Our efforts will provide the Indonesian government with guidelines for ways to help tigers and people thrive.

Our team is using an innovative field of science—called conservation genomics—that applies genome sequencing technology to conservation biology. A tiger deposits DNA in the soil on which it walks, in the hair it sheds, in the scent-marks it leaves to mark its territory, in the scat it deposits, and even in the water it drinks. San Diego Zoo Wildlife Alliance scientists use these samples to count individual Sumatran tigers using their unique DNA fingerprints, allowing for a novel and accurate way of conducting rapid population assessments.

Contact a member of our conservation, research, or wildlife care teams here.