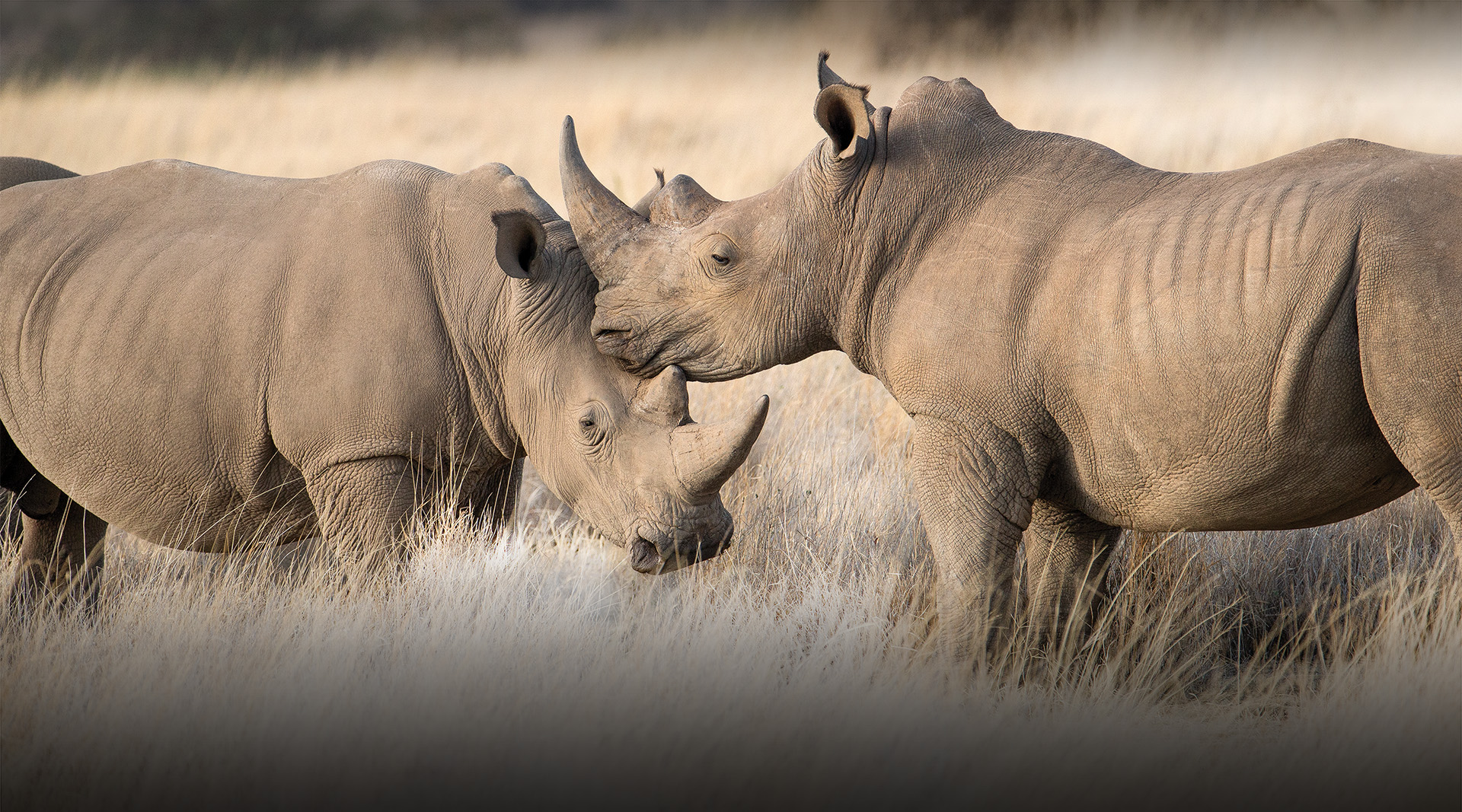 A herd of rhinos is called a “crash.” They weigh up to 5,000 pounds, are up to 6 feet tall at the shoulder, and have large horns—but rhinos are actually gentle herbivores. There are five rhino species: two native to the savannas of Africa, and three native to swamps and rainforests of Asia.

Today, all rhino species are threatened. Demand for their iconic horns has led to plummeting populations—even though their horns are made of keratin, the same material as your hair and fingernails. The most threatened of them all is the critically endangered northern white rhino. With only two remaining on Earth, saving them will take global partnerships, cutting-edge science, and the support of wildlife allies like you.

You support fuels our conservation efforts to save rhinos worldwide, and it all begins right here at the San Diego Zoo Safari Park. Join us Thursday, September 22 at the Safari Park, as we celebrate World Rhino Day, and all you make possible for their future.

The expansive grasslands of the African savanna are home to dynamic ecosystems of grazing herds, iconic predators, and gentle giants. We collaborate with conservation partners and local communities in Northern Kenya to protect wildlife in this key region, including rhinos, elephants, giraffes, leopards, vultures, zebras, and many more. Discover the cutting-edge conservation work you make possible through our Savanna conservation hub.

Don’t be fooled by their large, lumbering size—a black rhino can thunder along at 40 miles per hour. Charge into the exciting world of rhinos with fast and fun facts.

Join us in welcoming a new rhino calf to the crash.Last month, southern white rhino Livia delivered a healthy boy. Named Neville, he’s the third rhino to be born at the San Diego Zoo Safari Park’s Nikita Kahn Rhino Rescue Center. Neville is an important addition to the global population of his threatened species, and a crucial step forward in our efforts to save his cousin, the critically endangered northern white rhino—of which only two are left on Earth.

With you by our side, there is hope for the future of the species. Listen in to Amazing Wildlife: A San Diego Zoo Podcast, as we explore what led to their critically endangered status, and how, with the help of our world-class care and Wildlife Biodiversity Bank, San Diego Zoo Wildlife Alliance experts are using cutting-edge reproductive technologies to bring the northern white rhino back from the brink of extinction.

Join the herd of southern white rhinos at the Safari Park from anywhere in the world and enjoy a live view of the African Plains habitat through our wildlife cam, to see roaming herds of rhinos, giraffes, Cape buffalo, gazelles, and many more species thriving across the sprawling savanna.

Wildlife Explorers of All Ages

Discover more about rhinos and get wild with games, crafts, inspiring stories, and other adventures on our San Diego Zoo Wildlife Explorers site.

Your symbolic adoption helps save rhinos worldwide—including the critically endangered northern white rhino—offering hope for these gentle giants and for other extraordinary wildlife, here in San Diego and around the globe.

Be an Ally for Wildlife

As an ally, you’re supporting wildlife and the planet we all share. Your monthly gift helps save, protect, and care for wildlife at the San Diego Zoo, the San Diego Zoo Safari Park, and eight conservation hubs across the globe. Together, we’re working toward a world where all life thrives.